"Until 1998, the hall was heated by a steam engine located in a technical building (boiler room) - today there is a martial arts room there"

Construction works started in July 1972. Construction took 23 months, and similar facilities were built in 30 months. People from Poznań joined the work and worked out 7,000 man-hours. Half of them went to Poznań youth.

"Before Izabela Trojanowska's concert, an impatient and pressing crowd smashed all the windows on the foyer level"

The arena was built ahead of schedule. On June 28, 1974, the last act of the great construction work was completed: the Arena hall was put into operation. Thanks to the initiative of the management of the Provincial Committee of the Polish United Workers 'Party, Poznań was enriched with a new, excellent and much needed sports and entertainment facility.' The cost of its construction was estimated at PLN 80 million.

"during the communist era of the USSR, it wins the Acrobatics Championship, but the flag falls off the mast and lands on the floor"

The facility is equipped with special devices: a moving cabin of a central light ramp, enabling its operation, and a folding screen located in a trapdoor (24m by 15m). Both solutions were unconventional and were submitted to the Patent Office.

"After the Iron Maiden concert the band went to the Adria club, where the wedding was going on, they played at the wedding as a gift"

When the design works were underway, it was decided that the Poznań hall would resemble the Small Sports Palace from Rome (Palazzetto dello Sport). However, this shape is not a scream of the then fashion (in Katowice, for example, the Spodek), but the result of painstaking calculations. It turned out that such a structure will allow to accommodate as many viewers as possible in the interior. The dome itself was covered with gold-colored tiles. 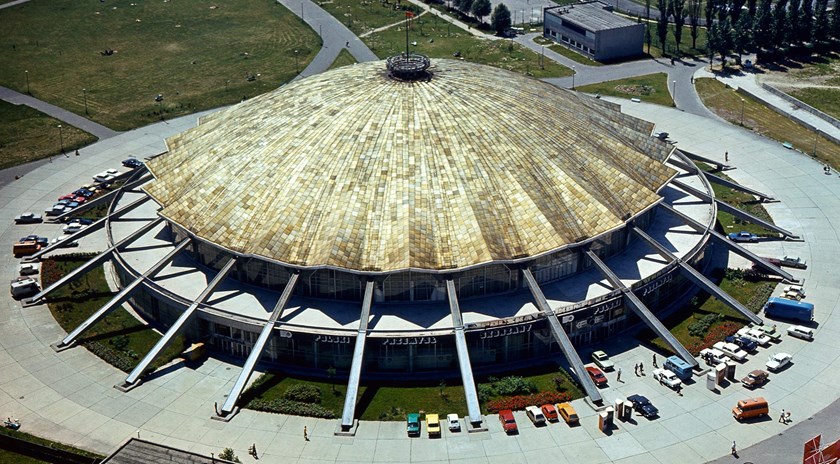